#The problem to solve↑

In image processing, retouchers may want to apply a saturation boost on specific hues only. Typically, uniform saturation corrections follow a basic linear transfer function $sat_{out} = gain \cdot sat_{in}$, where $gain$ is a real positive constant. To target specific hues, we simply rewrite $sat_{out}(hue) = gain(hue) \cdot sat_{in}$ where $gain$ is then a function. The most common way to declare $gain$ is to provide users with 8 discrete saturation nodes for 8 evenly-spaced hues, and interpolate smoothly between nodes.

The problem is hues are angles, and as far as angles are concerned, $0° \equiv 360° \pm 360°$, meaning they are not your regular 1D euclidean space, but they are actually a ring. This will need extra care not only to connect the curve between 0 ° and 360 °, but also to ensure the continuity of the slope and curvature (first- and second-order derivatives).

I have seen a smart and talented researcher fall into the trap of using regular Catmull-Rom spline to perform this kind of interpolation. Why is that bad ? Well… 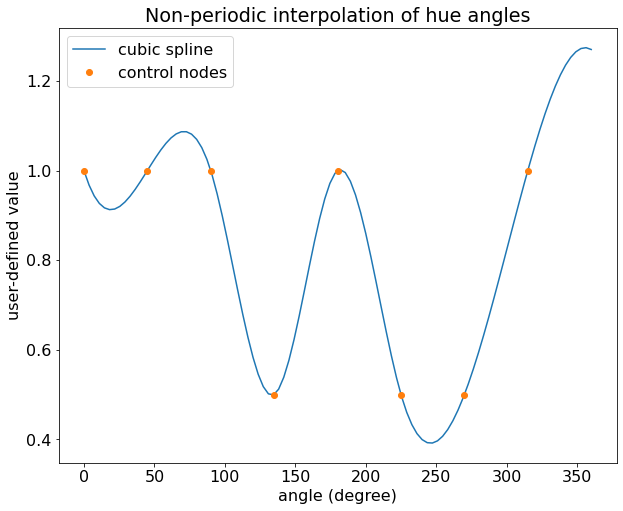 I used here a cubic spline, not the Catmull-Rom, just because it was already available in the Python library Scipy, but the principle holds (although the Catmull-Rom would not overshoot like this). Because I put the hue angle on an euclidean axis, it may not look obviously wrong straight away, but graphs can be deceiving and misleading. Since it’s an angle, let’s display it in polar coordinates. 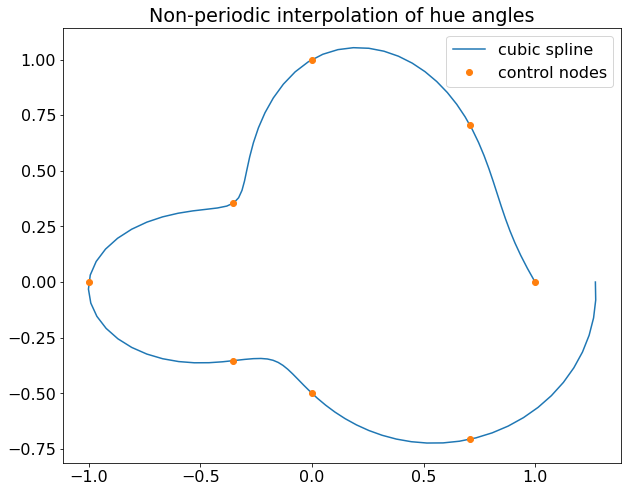 It should be immediately clear here that we have a problem : hues of 0.1 ° and 359.9 ° are expected to get a very similar correction, since they are conceptually so close, but our interpolation doesn’t know it and doesn’t care.

Therefore, we need to enforce a periodic condition, that is, ensure that the interpolated shape will close 0 ° to 360 ° as a proper ring and ensure at least $C^1$ continuity (continuity of the first-order derivative), such that the blending of the effects is flawless. None of the usual cubic/Bézier/etc. splines will do it there.

It makes sense, intuitively, to use trigonometric functions as interpolant here. In fact, Lagrange and Dirichlet have done it already in the 19th century. Since we already know that we will use 8 nodes evenly-spaced, there is even a nice simplification already done for us :

Here is the Python code :

And let’s display straight away the polar graph : 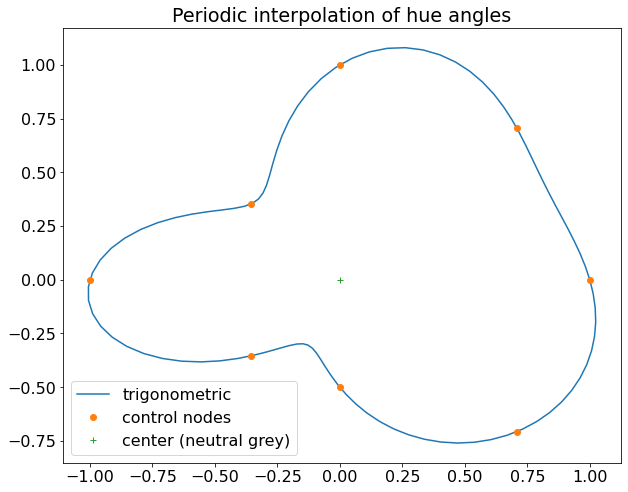 It’s much better, but there is a problem : the sinc function over- and under-shoot (it’s a known issue and the main flaw of the Lanczos resampling, and the worst is the cusps (inflection points) are not located on the nodes but in-between, which will make that tedious and counter-intuitive to control for the user.

Light and Cheney[1] have published in 1992 a paper about precisely what we want to do here. The problem is this paper is pure, theoretical maths that will be unreadable for most people, and the only numerical example they give is actually to show how it doesn’t work[2]. It took me 6 hours and 3 pages of calculus to digest this pile of hieroglyphs before I finally got some code working. I will try to give you here the primer.

Radial basis functions are basically functions that decay symmetrically as we move away from their center. You may already be familiar with one of them : the Gaussian function. Its center is the mean of the Gaussian distribution. The general form of a radial basis function (RBF) is $f(x) = g(|x - c|)$, where the $|\cdot|$ operator is a scalar norm and $c$ is the coordinate of the center.

To compute the $\lambda_k$, we need to write the Gram matrix $[A]$ of the interpolation, such that we can solve the problem :

where $\vec{x_k}$ and $\vec{y_k}$ are respectively the vectors of the angular and radial coordinates four all our control nodes. The square matrix $[A]$ of dimension $N×N$ will be populated at each index $(i, j)$ with the value $f_n(|x_i - x_j|)$, where $x_i$ and $x_j$ are the coordinates of the control nodes. Solving this equation will give us a new vector containing the eigenvalues $\lambda_k$, aka the coefficients for the linear combination of base functions.

Now, if you remember your calculus classes, this will require to diagonalize (or decompose) the matrix, which will fail in 2 cases :

In addition, since we are interpolating a radius, aka a distance, we can’t output negative values, so we need the matrix to be definite positive.

All these properties of the matrix $[A]$ ultimately depend on the properties of the chosen interpolation base function $f_n$, and the paper derivates very elegantly the necessary conditions on $f_n$ that make the problem solvable all the time, that is, make the $[A]$ matrix robustly diagonalisable.

Note that I have taken distances here with the notations of the paper, because the authors express $a_k$ the coefficients of the cosine decomposition, where $k$ denotes the number of terms in the cosine series. Since this overlaps with their previous $k$, the index of the control nodes, I denote it $l$ here[3]. $m$ is a natural integer arbitrarily chosen depending on the desired precision for the approximation of $f_n$ by the cosine series.

Note that using a spatial function and computing its cosine transform is only one way of doing it. You can directly declare $a_l$ coefficients the way you like, provided they decay to “almost zero” when $l \rightarrow \infty$. This $a_l$ is actually equivalent to a discrete high-pass filter, so its rate of decay will allow or filter more high frequencies harmonics, allowing more or less oscillations. You could even make the decay tunable, such that $a_l = \exp(-l^2 / c)$, with $c$ user-defined.

Now, at the end of the paper (theorem 26), they add another $\exp$ around our previous $f(t)$ and say “Interpolation at arbitrary distinct nodes is possible with this function”. I would be lying if I said I understand where that comes from, but they seem clever, so I will trust them. Also, I tested without that exponential, and the interpolation actually falls back to the previous trigonometric approach in that case. Being trained in mechanical engineering, I understand this term as a kind of dampener to prevent brutal oscillations. Which is why I love exponentials : they make everything smooth. The shame is $\exp$ also stands for expensive, as far as computers are concerned.

with $x_i$ and $x_j$, the angular coordinates of the nodes, $i$ being the vertical index, $j$ the horizontal index. Then pseudo-solve through least-squares or whatever to get $\lambda_k$.

Then, the interpolation is expressed by :

As it is customary in maths, the hieroglyphs look worse than the code to make them real : 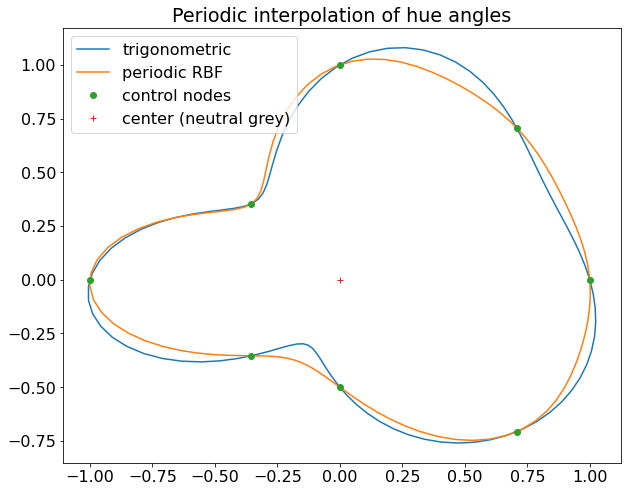 As you see, the periodic RBF is less prone to over/under-shooting and has the cusps mostly taped to the nodes. This should be less frustrating to control on the user side as well as better blended visually, in terms of the effect.

If we define $a_l(c) = \exp(-l^2 / c)$, which is the un-normalized Gaussian function, with $c$ an user-defined smoothness parameter, we can perform a parametric study of the effect of the decaying rate of $a_l$ : 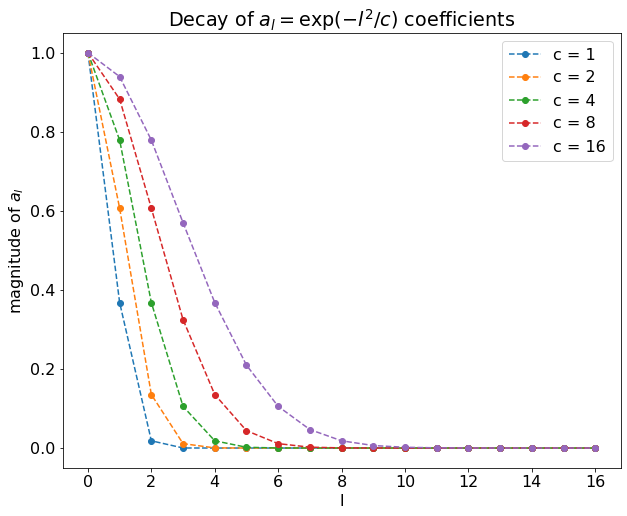 This shows how $c$ relates to the number of harmonics $m$ chosen for the cosine series. Using the well-known properties of the Gaussian distribution, we can deduce that setting $m = 3 \sqrt{c}$ rounded to the nearest upper integer will cover at least 99.6 % of the filter’s transmittance × bandwidth while discarding the vanishing coefficients, therefore avoiding useless terms evaluation.

We see that, for $c = 1$, the periodic RBF falls very close to the simple trigonometric approach. As $c$ increases, the decay gets slower, which introduces more harmonic high-frequencies, making the interpolation pattern degrade into a leaf pattern. The interesting property here, however strange the pattern gets when $c > 8$, is that the nodes are all local maxima, which is a desirable property for user-defined control nodes. An optimum seems to be found for $c = \pi$.

Note that the matrix $[A]$ is a Gram matrix, which is a particular Hermitian matrix, which can be solved efficiently by the Choleski decomposition. If you are not using Python and Numpy, I have implemented a Choleski-based matrix solver from scratch in C for darktable (licensed as GPL v3). Using the properties of the Hermitian matrix, it solves it using half as many computations as the typical Gauss-Jordan elimination method.

The radial basis functions can be fine-tuned for more or less damping, by allowing more or fewer harmonics, through the $c$ smoothing parameter. But they might be gay since they usually have an hard time conforming to straight patterns : 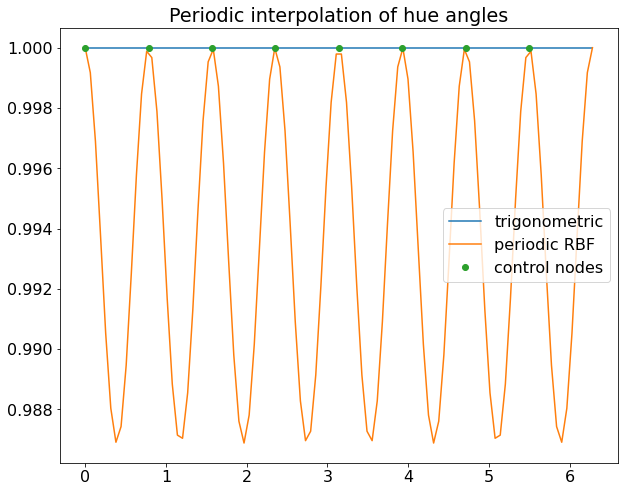 Here, the oscillations have an amplitude of 0.12 %, which is probably acceptable, but the trigonometric interpolation matches the straight line flawlessly. Reducing the magnitude of $c$ cuts more harmonics and better smoothens the interpolation, but at the expense of allowing more overshoot.

All in all, the $a_l$ coefficients can be tweaked to display particular behaviours, like vanishing for even or odd harmonics, allowing only the fundamental frequency, etc. Provided all $a_l$ are positive, the interpolation problem is guaranteed to be solvable.

I find this kind of application wholesome and oddly satisfying, as it bridges clean, elegant, fundamental maths with end-user interface design, in order to provide an intuitive and organically-feeling control over effects applied in the software. As an engineering student, I struggled to pass all my maths exams as all this theory, unconnected to real-life matters, didn’t made any sense for me. I wish I had access to this kind of (fun) application earlier, since starting with a practical problem made unrolling the maths much easier and more interesting, and it’s only by messing around with maths in Python and for practical applications that I began understanding notions I had known for years. Lots of years lost to purely theoretical teaching and dumb exams repetition training…

WebP is so great… except it’s not

The sRGB book of color

Image processing does not kill people… and it’s a shame 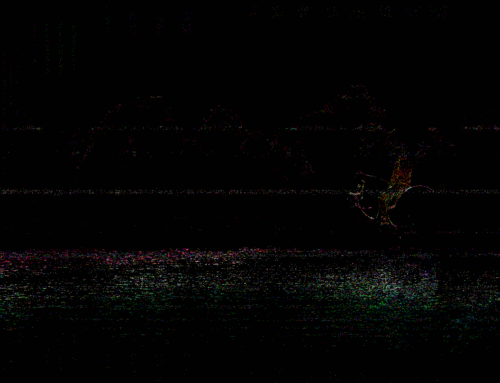 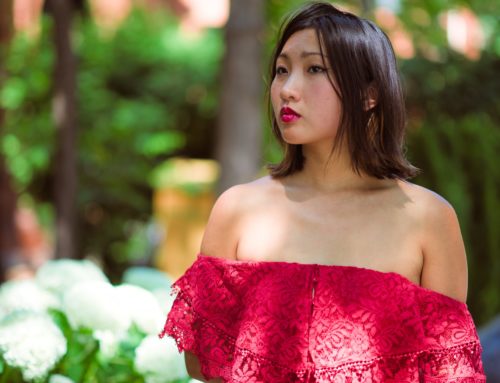 Filmic, darktable and the quest of the HDR tone mapping